This is a fanfiction written by Violetofen4.

Click on the character's image to be brought to their profile 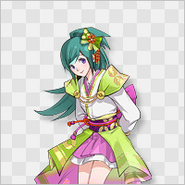 Billy Clark
Add a photo to this gallery

Lilian held the pamplet close to her mom so she could read.

Her mother smiled, her usual rosy red cheeks showing off her smile.

"I'm so happy for you sweetheart. I know you'll treat your first Pokemon very well. I gave you a bag and running shoes, if that's helpful for you." her mother replied.

Then she looked at her watch and almost screamed.

She dashed out the silvery pink door, almost leaping onto her bicycle and pedaling away as hard as she could towards the 10-minute-away laboratory.

Also in rush, she noticed Billy and Ivy just getting on their bikes. She sighed in relief, not wanting to be the odd late girl.

Hurry, Hurry! She bustled her way into the door, her two rivals right behind her.

Professor Aiki, who was practicing yoga, looked up from her blue yoga mat. She twisted her way upwards in some funky excercize and said, "Oh, hi."

The professor laughed a bit while the three 10-year-olds stood there, dazed.

"Well, come on. Lilian, you pick your first pokeumon."

Lilian grinned, hobbling over to the counter where three pokemon sat.

It was a hard choice, all three were cute but strong in their own ways.

Tympole wagged its tailfin at her when it approached.

She smiled, then looked at Hoppip, who stared back, eyes round, and said, "Ho-pip-pip?"

Lilian blinked, pushing the blonde hair behind her ears, then settled her eyes on Shinx, who nodded knowingly and smiled back.

"I'm taking Shinx, and naming her Mint." she announced.

Mint nodded again, this time in approval, and touched her nose to her pokeball, vanishing instantly inside. Lilian smiled again, putting the pokeball in her case.

Billy shoved past Lilian, almost knocking her over.

She narrowed her eyes in defiance as he claimed Hoppip, as Ivy did with Tympole.

They walked away cheerily after being handed Pokeballs, and rushed out of the lab by Professor Aiki.

Mint's Pokeball suddenly opened, and the Shinx hopped into the basket on the front of her bicycle, blue fur smooth.

She let out a cat-like yawn and waited anxiously for the ride.

And off they rode, away from childhood memories of Thuum Town.

A terrified shriek made Lilian skid to a halt.

A deerling, being attacked by a ratata. The deerling was coughing horribly as the small purple pokemon bit its shoulder then battered it with its paws.

The Ratata lept forward, biting Mint's elbow, who screeched and fired a yellow ball of electricity at her attackers' face. The wild pokemon fell to the ground, stunned, as Mint bared her sharp teeth at it.

Lilian scooped up the injured Pokemon, placing it in Mint's basket.

Mint ruffled out her blue fur and hopped in next to the sick creature, then licked its forehead caringly. The deerling's large, teary eyes broke Lilian's heart to see it in pain. She put a land on its golden-orange fur and brushed it gently.

"We'll get you to a Pokemon Center, alright? Just bear with me a few minutes."

"Shiiinx!" Mint hissed, as if trying to tell her something.

Lilian was truely confused, but Mint shrank down and made herself look like a square, then said,

Mint sighed in relief, dazed, looking at the red bite mark on her foreleg when she fought the ratata.

Lilian yanked out the blue bottle and sprayed gently over the wound, which began to heal almost instantly.

Deerling began to whimper again. Lilian grew worried, then hurried on her way.

Soon enough, Aster City was ahead. The red roof of the Pokemon center told her that Deerling was gonna be okay. She parked her bike and carefully picked up the injured Pokemon in her arms, Mint hopping out with her.

"It's only been an hour with you, Mint, and we found trouble." Lilian tried to joke but her tone and expression was grim.

Nurse Joy hobbled over to her when she opened the glass doors.

"He's sick and injured, can you help him?"

Hours passed. Lilian waited, her green eyes glittering, when she saw Ivy having Tympole healed up. Mint bared her teeth as the two walked forward with smirks on their faces.

Tympole hopped after her master, who sat down next to her rival. Mint curled herself up in Lilian's lap and frowned, eyes narrow.

"I see you two have bonded already. So 'ave Tympole n' I." We're two-of-a-kind. Why're you here?" Ivy said with a laugh.

Lilian replied sharply, "We found a sick Deerling by the side of the road and decided to help it."

"Heck, so you're wasting your time helping weaklings?"

"If I'm wasting my time, then how did I get here before you>"

She smirked back. Her words stung Ivy, who rustled her ice-blue hair.

Mint's tail flicked as she sat up on her forepaws, nestling close to her friend Lilian.

Ivy walked away, Tympole in her arms, right as Deerling ran up towards Lilian, leaping into her lap and squeaked, "Deer-ling!"

"I've fully healed Deerling. He had Pokerus and was very contagious. I'm glad to see him so well, thanks for rescuing him."

Nurse Joy dipped her head and began to walk away.

Deerling wagged his stubby tail. Mint purred, eyes beginning to close. It was very late at night, Deerling had taken almost half a day to heal.

"Deerling, when it's morning I'll take you back to the forest."

Deerling's eyes grew big and teary again. He nudged a pokeball with his hoof.

"You want to come with me?"

He poked his nose to the button on the Pokeball, vanishing inside. A soft "boop" confirmed his capture. She threw the ball down, which returned to her hand as he popped right back out, then hopped back up, curling on her lap with her Shinx.

"Can I name you?" Lilian asked with a yawn.

And the three friends drifted off to sleep...

Retrieved from "https://worldoffanfictions.fandom.com/wiki/Pokemon_Adventure?oldid=19341"
Community content is available under CC-BY-SA unless otherwise noted.